A University of Wolverhampton academic has been awarded an MBE in the Birthday Honours List 2020, which have been delayed since June because of Covid-19.

Mark O’Shea, Professor of Herpetology, has been recognised for services to Higher Education, Zoology, Reptile Conservation and Snakebite Research. 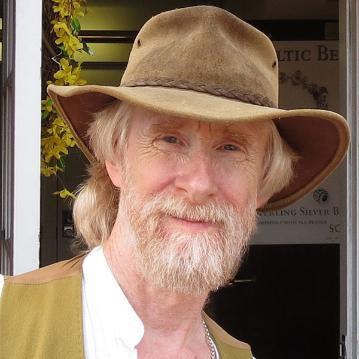 The Member of the Most Excellent Order of the British Empire (MBE) was awarded on 10th October 2020. The Birthday Honours List recognises the achievements of a wide range of extraordinary people across the United Kingdom and is an award given by the Queen to an individual for outstanding service to the community or local 'hands on' service.

Wolverhampton born and educated, Mark graduated from Wolverhampton Polytechnic in 1985 with a degree in Applied Sciences. The University awarded him an honorary doctorate in science in 2001 for his contributions to herpetology and he was appointed Professor of Herpetology in 2018.

Herpetology is the branch of zoology concerned with the study of Reptiles (snakes, lizards, amphisbaenians, the tuatara, turtles and tortoises, and crocodilians) and Amphibians, (frogs, toads, salamanders, newts, and caecilians). Mark’s speciality is venomous snakes.

Mark teaches on the University’s Animal Behaviour and Wildlife Conservation course in the Faculty of Science and Engineering and held the position of Curator of Reptiles at West Midland Safari Park from 1987 until recently.

An internationally renowned TV presenter and reptile expert, he is an explorer, professional photographer, author, public speaker and a respected scientist.

As an advocate for herpetological conservation issues Mark works in areas where there are high incidences of snakebites which claim up to 138,000 lives each year and permanently disable a further 400,000 victims. He has conducted herpetological fieldwork or made films in almost 50 countries, on every continent except Antarctica.

He has worked on numerous tropical expeditions, including snakebite research projects, co-leading a team recording the entire herpetofauna of Timor-Leste, Asia’s newest country, many of the species being new to science. His most recent expedition was to catch and milk highly venomous snakes in Myanmar (Burma) for a snakebite and antivenom production project.

Mark’s research has also led him to describe four new snake species and a new gecko, with approximately eight new snake species in the pipeline. His wide range of publications include a field guide to the snakes of Papua New Guinea, which is is currently revising and updating, and, more recently, The Book of Snakes: A life-size guide to 600 species from around the world. He is currently finishing a book on the ecology of lizards. In 2018, a new species of snake from Indonesia was named the Cylindrophis osheai (O'Shea’s pipesnake) in honour of Mark, by a group of German herpetologists. His popularity means his public lectures and outreach work are well-attended by people of all ages, encouraging young herpetologists interested in studying Science, Technology, Engineering and Maths (STEM) subjects.

He said:  “I was astonished to hear that I had been put forward for an MBE, the first I knew was when I received official notification from the Cabinet Office.  I’m absolutely thrilled and humbled to have been recognised in this way. Not only is this rewarding me for my long, varied and, at times, dangerous career, it is putting the spotlight on the research I do, especially highlighting the problem of snakebites around the world.

“What I learned during my time at Wolverhampton Polytechnic played a really important role in my transition from reptile enthusiast to reptile scientist.  And the most important thing is that my life experiences enable me to give back to and encourage the next generation of zoologists and herpetologists.” 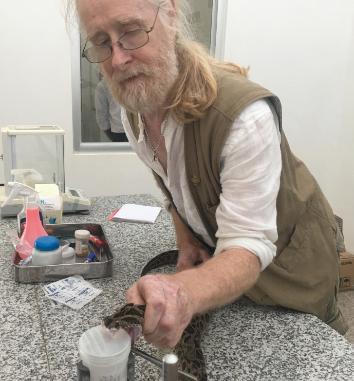 Picture caption: Mark O’Shea in 2018 in Myanmar for Adelaide and Oxford Universities, catching and milking medically important snakes for venom research and antivenom production, in the antivenom lab north of Yangon milking an Eastern Russell’s viper (Daboia siamensis), arguably one of the most three dangerous snakes in the world causing a huge number of fatalities and debilitating side effects in those lucky enough to survive its bite. This is one of the specimens Mark obtained on the road to Mandalay. You can see its huge fangs in their fang sheaves just prior to the fangs penetrating the membrane.

Anyone wanting to study Animal Behaviour and Wildlife Conservation at the University should register for the next Virtual Open Day on Saturday 10th October 2020.