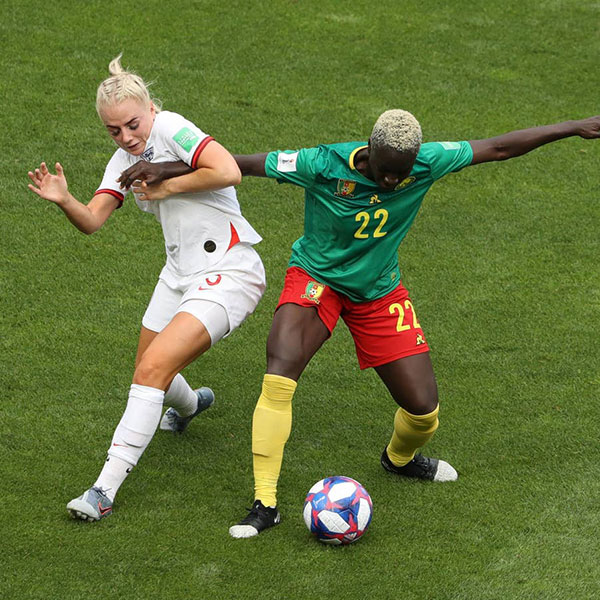 Compared with the outrage expressed by many UK journalists and newspapers who are not known regular followers of women’s football, Professor Jean Williams and Professor Tracey Davenport argue the need to understand why we should have compassion with Cameroon’s women’s national football team as they exit the Women’s World Cup 2019.

Rather than England coach Phil Neville’s comments that the players behavior was shameful, we explore in a less emotional way, perhaps why they reacted as they did in their match against England.

Coaches call the situation when players are prone to making bad choices examples of ‘over-stimulation.’ Clearly, we want athletes to be excited and certainly not under stimulated by a sporting challenge but at optimal level able to be creative when playing football, in order to express themselves.

However, when over-awed by an occasion or when there is a perception of unfairness, players can react in ways that lack discipline. This happens at all levels of world football. Cameroon felt aggrieved coming into the match, having already complained against the officiating in their 2-1 win over New Zealand, having previously been defeated by The Netherlands 3-1, and Canada 1-0 in the group stages. We also saw an own goal mistake that foreshadowed the back pass against England that provoked an initial reaction. As the mistake of the back pass gave way to a sense of unfairness, with two crucial VAR decisions going against Cameroon, the first quite rightly and the second a very questionable call, individuals began to lose composure and their coping strategies were replaced, in some cases, by poor decision making. This can happen to any player - remember Zinedine Zidane’s rather oddly attempted headbutt of Marco Materazzi that landed on the latter’s chest in the 2006 World Cup Final?

2. So we then ask, how mentally prepared were the Cameroon women players before the tournament with visualisation, coping strategies and big match experience?

The short answer is not very well prepared, for structural reasons in their national association. Cameroon's football federation (known informally as Fecafoot) appointed Alain Djeumfa as coach of the national women's team, just four months before the start of the World Cup in France. Formerly the strength and conditioning coach, Djeumfa replaced Joseph Ndoko who had led the team to a third-place finish at the Women' Africa Cup of Nations in Ghana, for their place at France 2019. Djeumfa said he found the task ‘daunting’ and his assistant coach was the former captain Bernadette Anong https://www.bbc.co.uk/sport/football/47014870 Having already set a target of matching their achievement of equaling or bettering reaching the round of sixteen at their first ever Women’s World cup in Canada 2015, there was an enormous weight of expectation on the team, given this lack of preparation.

3. There are fewer chances for women’s teams in Africa to reach a Women’s World Cup Final

Put simply, what we saw against England were a group of women using the World Cup as a showcase of their talents, and desperate not to go home. There are myriad academic papers on Cameroon male players and their migration across the globe as professional players. The women, all of them amateur, had a smaller window in which to shine. Even if the African national federations support qualification for the Women’s World Cup, and some do not fund the women to take part at all, African nations have fewer chances to shine in a Women’s World Cup because of the berths available often arranged by Confederation, of which there are six.

By far the highest number of teams are from Europe with nine teams of the 24 (hosts France, England, Germany, Italy, Norway, Scotland, Spain, Sweden and The Netherlands). Then, Asia with five spots available (Australia, PR China, Japan, South Korea and Thailand). There are only three South American countries who can be represented (Argentina, Brazil, and Chile). There are just three African nations slots available, (Cameroon, Nigeria and South Africa), and three for North America and the Caribbean (USA, Canada and Jamaica). There is one for Oceania, New Zealand.

The African Confederation is the largest of FIFA’s confederations, with 54 full members and two associates. Comparable in size with UEFA then, which has 55 members, there is concern that non-European national associations are disadvantaged by the current organisation of Women’s World Cup.

The Cameroon football federation has supported a men’s national team since the early 1960s and did not support a women’s football team until 1991. Canada 2015 was their first Women’s World Cup. Many of the players play for clubs outside Cameroon and hope to improve their professional prospects each tournament. Ajara Nchout’s winning goal against New Zealand was probably the goal of the tournament so far.

Of course, we must expect the highest conduct of our players and other eliminated teams have shown great dignity in defeat and Cameroon have enriched the tournament. But perhaps if we think that, at the time Cameroon were rattling Steph Houghton’s ankles, the Nigeria women’s team were refusing to leave their hotel in protest at not receiving their appearance fees, which had been kept by their national association, it gives us a bit more context as to the desperation we saw in the England v Cameroon match.