Working with our partners in sport: A weekend spent with GB judo at the Paris Grand Slam 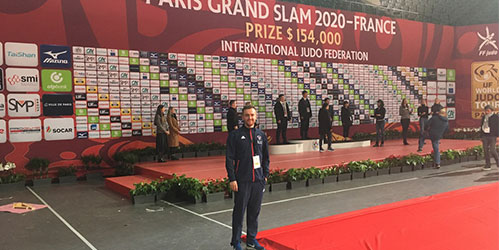 One of the privileges as an applied sport scientist is the opportunity to view the teams and athletes you work with perform on the biggest stages, writes Dr Ross Cloak. Since GB judo moved their national centre to our Walsall Campus we have had an excellent relationship.

Colleagues and I in the Department of Sport have worked closely with the world class coaching, medical and sport science team over this period and it has been a great benefit to both parties in terms of enhancing curriculum, research collaboration and outreach. I was invited to attend the Paris Grand Slam one of the biggest (and loudest) events on the judo calendar and this blog gives a flavour to the non-judo person of the what the competition looks like on the ground.

Contrary to popular belief, the travel for an elite athlete and support team is rarely a glamorous affair. Time spent in the country you are competing in is no longer then the minimum required, depending on your weight category you may catch a later flight as you compete the following day. The support staff also have to pack items for every eventuality - the physio’s bag being one of the biggest. In a sport of such a physical nature the risk of injury and illness is always there, head coaches will carry laptops with opponent footage on, as well as a freshly pressed suit (for those players that reach the final block of the competition it means their coaches must change from tracksuits into a suit while sitting at the side of the mat). The work that goes into arranging the transport and accommodation for a group of athletes and support staff is a military operation and GB Judo Logistics manager John Bramall does an exceptional job at organising the team.

On arrival in Paris

Once at the venue, the running order of things are clearly laid out on the itinerary given to all (“Focus on your best performance” the mantra at the top of the document). Athletes and coaches firstly look out for the draw, who they will be fighting and the possible permutations if they progress through the rounds (although clear that they take one fight at a time). The elite judo community being a small one, coaches and players will be familiar with one another, this however doesn’t mean there is any complacency. Meticulous opponent footage collected and coded by Head of Performance Analysis Chris Barry is on each coach’s laptop and opponent analysis and fight plans begin to be developed by Head coaches Kate Howey and Jamie Johnson.

The first day finishes with a “Judogi Check” - this is a check to make sure the kits the fighters are wearing are a certain length and fit (important as this is your main point of contact in the fight) and this is followed by a weigh in. Judo being a weight classified sport the importance of nutrition and weight making in a safe and effective manner is a critical factor to fighter success and athletes work closely with Nutritionist Louise Bloor to achieve this. The University supports this work with regular DEXA scans at our Health Scan Facility and Laboratory testing. A final debrief from Performance Director Nigel Donohue on timings and schedules for the following day is complete and staff and players head off for some food and an early night. 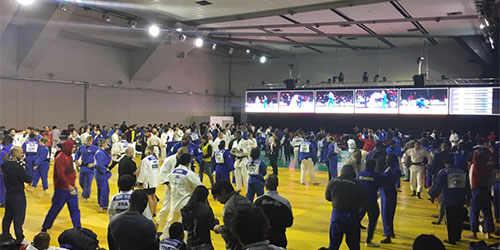 The weight making does not finish with the previous night for the fighters, unlike a number of other combat sports Judo has a random weight check on the morning the athlete is competing. The weight of the athlete cannot be more than 5 % higher than the official maximum weight limit of the category, if it is the fighter is disqualified. The nature of “random” also means that the athlete and staff have to be available from 7am that morning if they are called for a weight check. With the final block of fighting going on until 6pm in some cases this can make for a long day. Once the day begins the warm-up area is where the team is located, a tightly packed space you are not afforded much room due to the numbers of nations with their own teams and athletes. It is here where David Hart (GB Physio) and Andrew Cruicshank (Sports Psychologist) will spend the majority of their day managing individual requests, strapping and working 1-1 with athletes and coaches on schemes of work they have been developing long before arriving in Paris. The athletes will go through their warm-up routines with coaches and other GB players and then make the walk out to the arena with their coach. One of the biggest skills on the day is dealing with the long periods that could be between fights and how quickly the fight order is moving. Each new fight starts with a warm-up and tactical/technical discussion with coaches, viewing previous fight footage of their opponent while also being treated for any knocks picked up in the previous fight. 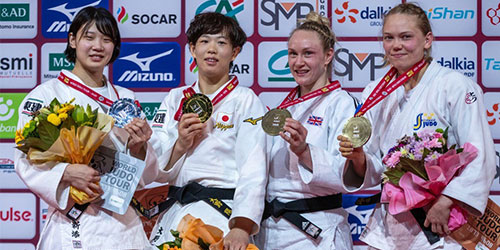 The weekend itself provided some really strong performances for all the GB athletes who competed, in particular the highlight was Gemma Howell’s bronze medal beating world champion silver medallist. Gemma, who is based at the Centre of Excellence in Walsall and from Wolverhampton Judo club, showed all the trademarks of grit and determination throughout the day and delivered when it mattered in the final block of fighting on Sunday afternoon. Gemma has always been fantastic ambassador for sport (herself a graduate of Sport and Exercise Science) and any student led projects in the Department she and the rest of the GB judo team have embraced and been happy to support and participate. The podium finish on Sunday helped temper the 24hr flight delay at Paris CDG airport thanks to Storm Ciara! I was joined by other members of staff who where not staying out for the training camp and headed back to Walsall to plan for the next event in a busy period leading into Tokyo 2020 Olympics. 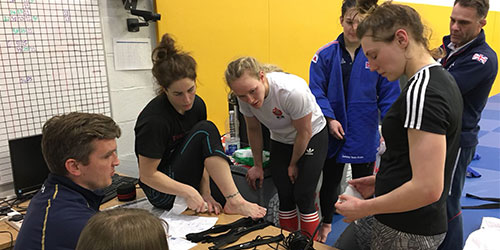 A big thanks to all GB judo staff and athletes for the privileged access in Paris, the partnership between GB judo and the University has a great deal of benefits for staff, sport students and the wider community and we look forward to building on this partnership going forward.