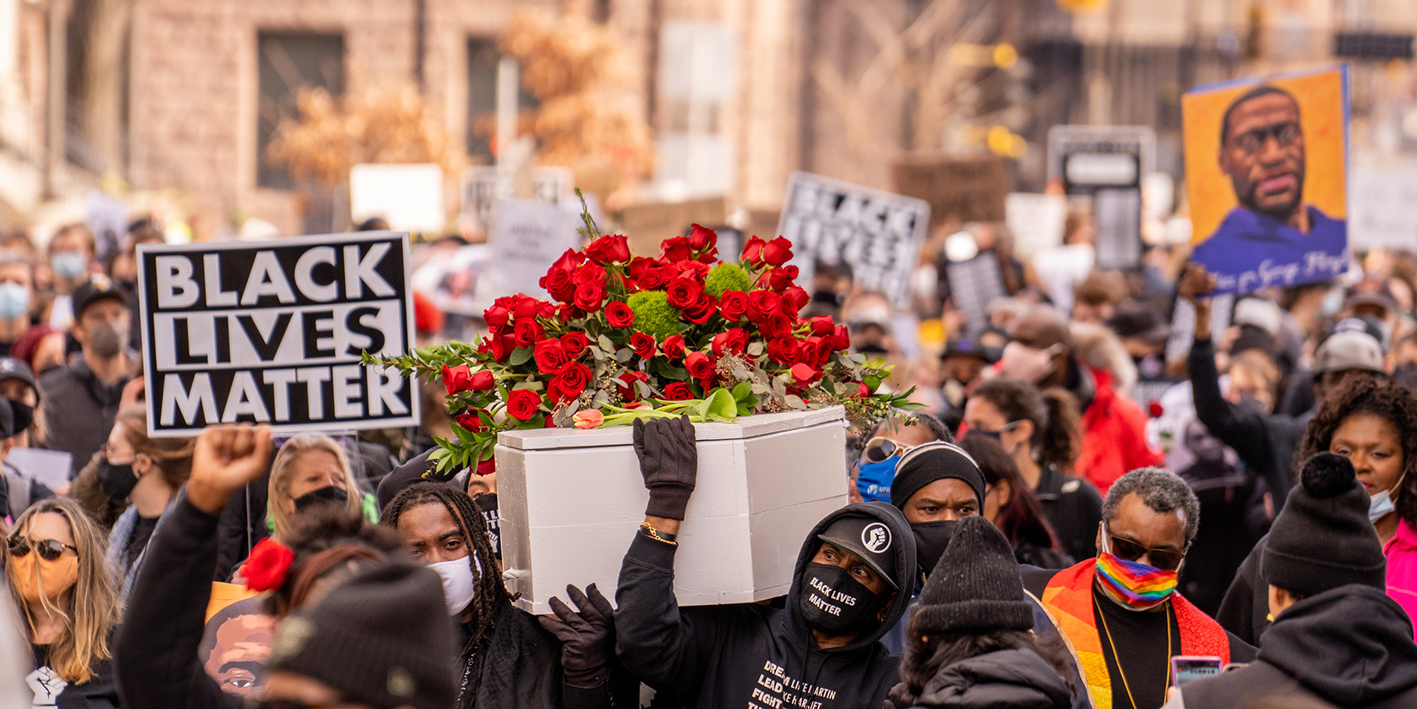 A blog post by Dr Howard Fuller, Reader in War Studies, from the School of Social Historical and Political Studies (Faculty of Arts Business and Social Sciences) and the Centre for Historical Research. Dr Fuller was interviewed by Free Radio on Wednesday, 21 April on the broader impact and significance of the recent conviction of Derek Chauvin.

Derek Chauvin is a white Minneapolis police officer who was charged with second-and third-degree murder and manslaughter of black suspect George Floyd on 25 May 2020. With Chauvin’s knee pressing down on him, Floyd (who was handcuffed and unarmed) repeatedly gasped ‘I can’t breathe’ until he died. Chauvin’s fellow-officers at the scene failed to intervene, intent on holding back a small crowd of horrified onlookers pleading for Chauvin to stop.

The privately recorded event quickly spread across mainstream and social media platforms, polarising American social politics and touching off a nationwide string of Black Lives Matter memorials and protests throughout the U.S. and the world. Many of these were then violently suppressed by local authorities and National Guard troops – some of the worst clashes since the Civil Rights Movement of the 1960s.

Concerns over police brutality and racial profiling vs. former President Trump's call for 'Law and Order' later dominated the now infamous 2020 U.S. Presidential Election. Here the surprise influx of mostly urban Black voters in cities like Milwaukee, Detroit and Atlanta proved crucial in battleground states Wisconsin, Michigan and Georgia in tipping the Electoral College in Democrat challenger Joe Biden’s favour. An armed mob of pro-Trump supporters, spurred on by the incumbent President that such election results must be ‘false’, later stormed into the U.S. Capitol (on 6 January of this year) seeking to overturn the election results by force.

The landmark trial could see new laws enacted which limit police powers in the United States, including the use of deadly force and 'no-knock warrants', whilst ensuring greater accountability. Democrats in Congress have drafted a George Floyd Justice in Policing Act. Far-Right Republicans in turn have proposed an ‘America First’ national caucus, emphasising ‘uniquely Anglo-Saxon political traditions.’

As such, Chauvin's conviction and the role of policing in society remain particularly controversial as examples of the larger, long-term question of 'systemic racism' in both the U.S. and abroad.

The University of Wolverhampton’s Department of History, Politics and War Studies examines this and similar discussions over decolonisation, globalism and nationalism in research-led undergraduate modules such as 5HS012/Minorities in the Twentieth-Century United States, 6PO008/India in a Global World, and 5WR008/Pax Britannica? War and Peace in the Long Nineteenth Century. At the graduate level, the School boasts several critically-acclaimed MA degree programmes (both campus-based and fully-online) which study human conflict, and political and social reforms throughout the 19th and 20th-centuries particularly. Contemporary debates over national identity and ‘heritage’, and class and racial tensions feature prominently as academic focal points.

Clearly these are not just burning issues of the distant past, which history has somehow laid to rest and forgotten, but increasingly disturbing daily news. We are haunted by our history, and this serves to compel us into serious self-reflection, and action.

Nor is it just an ‘American’ problem or a British one. In the looming shadow of global environmental breakdown, it is the defining issue of the entire modern era; whether or not all races of humanity are going to come together and save the future.