Connah Anders, a University of Wolverhampton student and member of the Great Britain Judo squad, is going to be rowing the equivalent of the English Channel tonight (5 May) in memory of his grandad.

The-25-year-old, from Hindley, will be rowing 22 miles on a rowing machine in his dining room tonight to raise funds for Wigan and Leigh Hospice which cared for his grandad Alan Davies.

Alan, who was a police officer until his retirement, sadly passed away from mesothelioma in the hospice in February 2020 aged 73.

Connah, who trains on the Walsall campus and is a blind athlete, wrote on his event’s Facebook donation page saying: “In February 2020, my grandad Alan Davies spent his last days in Wigan and Leigh Hospice following a short battle with cancer.

“My grandad was also cared for by members of the Hospice at Home Team. The support and care my grandad and all the family received in these final months, weeks and days will never be forgotten.

“To raise funds for Wigan and Leigh Hospice, and support the vital work they do, I am carrying out a non-stop row, equivalent to the English Channel, on a rowing machine.

“I would really appreciate all your support and donations to this very worthy cause.”

On the Wigan and Leigh Hospice website, Connah is quoted saying: “I was in Georgia training at the time he was on the ward so I asked my mum a lot of questions about what was happening.

“She told me what help he was getting, how he had his own bedroom and patio doors and I realised they were doing a lot.

“During the pandemic I haven’t been able to train because it’s a contact sport, and now I want to get fit, so I can hopefully restart my judo training. 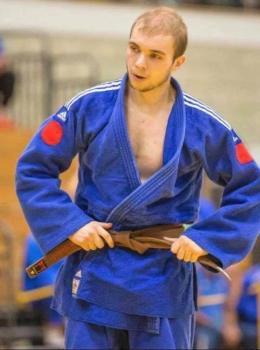 “I also wanted to do some fundraising so I decided to put the two together.

“I wanted to push myself to do something I haven’t done before.

“I got a rowing machine off my parents at Christmas and wanted to do something with a difference so I picked a distance of rowing the equivalent of the English Channel at random.

“I’ve not given myself a massive training window because I want it to be difficult.

“I know if I’d given myself six months to train it wouldn’t be a challenge so I’ve given myself a few weeks to get used to it and straight away it’s a massive challenge.”

He added: “My granddad was funny, he always helped me and he was interested in knowing what I was doing. He lived across the road so I saw him all the time growing up.

“I wanted the funds to go to a charity that I know does a lot of good stuff and I thought after what happened with granddad I wanted to help the hospice.”

He expects the challenge to take around four and a half hours and is hoping to livestream his efforts from around 6 pm.