Chance Glassworks Heritage Trust was formed in March 2015 with the aim of restoring the buildings that are still standing on the Spon Lane site. The Glassworks is a site of great historical and cultural significance.

The Chance Brothers Glassworks was established on 18th May 1824 and in the following decades, produced specialist glass at a scale unprecedented in the UK for clients of every type. They supplied glass for the Crystal Palace, which was probably the company’s most famous single project, but it was the design and production of lanterns for modern lighthouses, which was arguably the company’s greatest achievement; the legacy of which can still be seen in virtually every lighthouse in the world.

For more than 130 years Chance Brothers was one of the most important industrial employers in the Midlands and its workshops extended across nearly 30 acres southwards from the current site into the North Smethwick area. The site finally closed in 1981 yet its stark remains are still very much extant and no-one can drive along the M5 without noticing the imposing seven storey building directly alongside the canal that dates back to 1847.

The glassworks has fallen into a state of disrepair since its closing, and the once 30 acre site has been developed for various commercial and industrial uses leaving only a few remaining buildings.

The Chance Glassworks Heritage Trust aims to redevelop this site into a mixed residential and leisure complex which will help to regenerate the area whilst also providing new homes.

The remaining structures lining the Telford Canal and the seven storey building in the centre of the site make up a total of seven listed buildings and is a Scheduled Monument. Due to the nature of heritage buildings, renovation work needs to preserve original features of the buildings.

What did we do?

Our team scanned Building L, in the middle of the site, which has 2 floors. Unlike modern buildings, scanning here was tough because there was vegetation and debris inside the building, meaning you didn’t have any distinct lines for the scanner to pick up. We had to be extra careful where we located markers, so that the scanner could identify stairs and recesses in rooms. 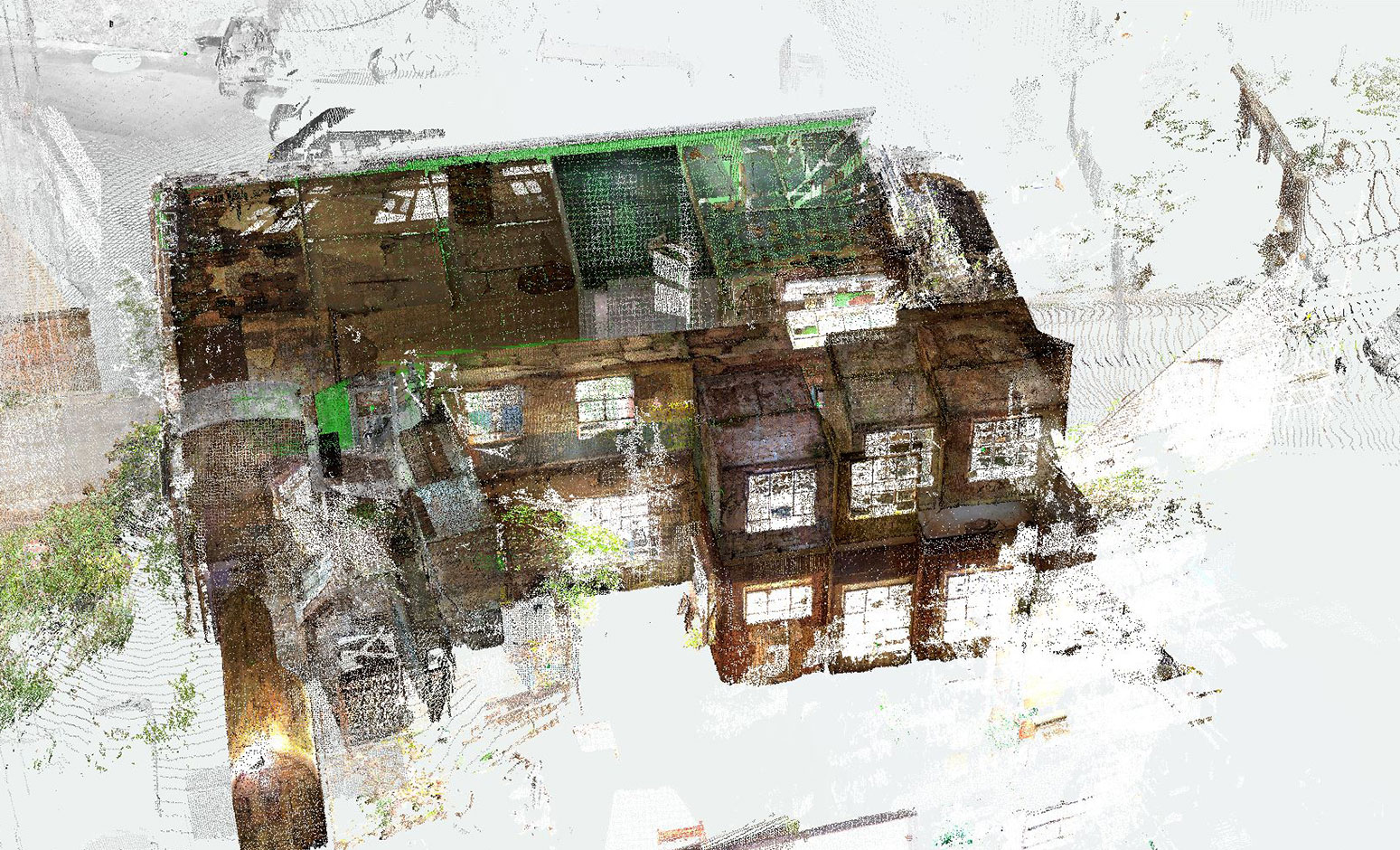 The team scanned the entirety of building L – a two storey building which had become extremely dilapidated over the years.

Scans look akin to a pixelated photograph, but this isn’t just an image; each pixel on the scan represents a point which you can measure, and the measurements are of +1mm accuracy. The scans were stitched together to produce 3D plans of the complex structure and architectural detail of the site – internally and externally. The scanning took a total of one day, and then half a day to process and analyse the data.

Scanning is an important part of the renovation process; it’s the difference between taking thousands of manual measurements (which you may have to re-take from time to time), and having the information available at a click, in a 3D image. It is more consistent, accurate and much quicker. For heritage buildings especially, there are limitations on which historic features can be modified, so the 3D scan will help greatly in visualising and incorporating these features into any new design proposals and building the room layout.

Scanning has the added value of being a safer alternative to manual surveys too. Some areas were too dangerous to access fully, but the scanner can be placed in a doorway and provide data up to 150 metres away due to the long range, so we didn’t need to send a person into unsafe areas. 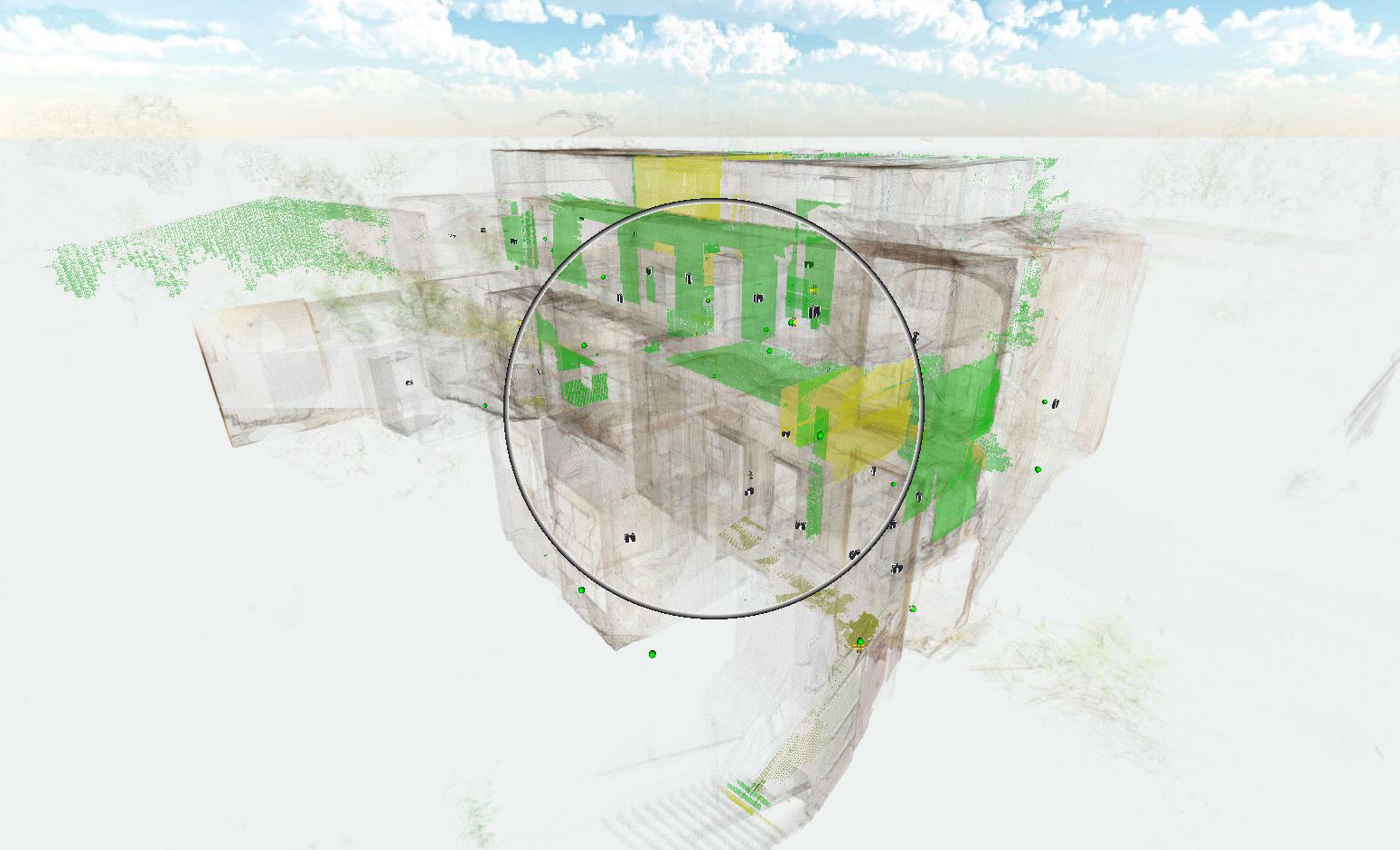