A musical collaboration between the University of Wolverhampton and the Canales Project has contributed to the release of a compilation album which tunes in to women’s voices.

The School of Performing Arts partnered with The Canales Project in 2019 to debut the Hear Her Song initiative in the UK and the debut album of the same name will be released on 26 March 2021.

Hear Her Song is an initiative of the Canales Project, a not-for-profit arts organisation based in the United States, which promotes the work of women through their own stories told in the medium of song.

The UK project featured ten commissioned songs written by UK female composers, honouring women for their global achievements and the album features two of the songs commissioned by the University of Wolverhampton - ‘Grateful’ written by Rosabella Gregory, inspired by Shivika Sinha and ‘Yours is Ours’ written by Gwyneth Herbert, inspired by Gloria Steinem.

A virtual launch party is being held on Friday 26 March at 4.00 pm to celebrate the release of the album, which will be available across all platforms.

A promotional video, featuring the work of one of the University of Wolverhampton’s partner composers (Gwyneth Herbert) can be found here.

Dr Sarah Browne, Head of the School of Performing Arts at the University of Wolverhampton, said: “We were thrilled to have partnered with this exciting project designed to celebrate the achievements of women in the UK and the launch of the new album will be a fitting and timely tribute as Women’s History Month draws to a close.

“We offer our performance students state-of-the-art facilities in our Performance Hub and it was a fantastic opportunity for our vocal students to be involved in the high-profile UK premiere which gave them access to world-leading composers and musicians.” 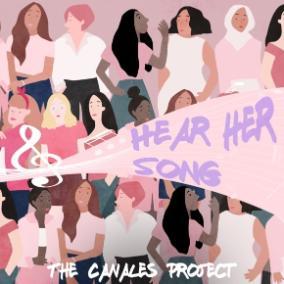 Anyone interested in studying in the School of Performing Arts should register for one of the forthcoming Virtual Open Days.

Composer Rosabella Gregory, a graduate of the Royal Academy of Music, is an award-winning singer-songwriter and composer. She has released three albums and performed her work throughout the UK and internationally, as a solo artist at venues such as The Royal Festival Hall, Pizza Express Jazz Club and 606 and in support of the legendary Jools Holland on his Country House tour. Her musicianship has also led to wide ranging collaborations with such luminaries as Bob James, Anoushka Shankar and Soumik Datta. Rosabella has worked in theatre, television and opera, the latter most recently in collaboration with Opera Up Close composing their new online opera for children and her work has recently been performed at such eclectic venues as Hoxton Hall/Grimeborn, The St James Theatre and 59e59 Theatre New York. Collaborating with her twin Dina has given Rosabella some of her most rewarding writing experiences, from in their early years writing a rock opera for the ENO Lillian Bayliss programme to winning the Vivian Ellis prize together at the age of 21 right up to the present day and their collaboration on a wonderful new adaptation of The Wind in the Willows for Audible

Track 8. Yours Is Ours

Composer Performer, composer / lyricist and musical activist Gwyneth Herbert has been hailed as one the most imaginative and idiosyncratic artists of her generation. She has collaborated with artists, orchestras, brass bands, kids, pole dancers and puppets to produce a huge canon of work that, whilst challenging expectations, seeks to find dialogue with the world. Her seventh solo album, Letters I Haven’t Written, was accompanied by a UK tour that explored the struggle for connection through film, storytelling and song. As a key part of the project, Gwyn held Letters workshops with different groups from each community, who then joined her onstage – listening, learning and making together. She is the co-creator of six musicals, including Bristol Old Vic’s record-breaking production of “A Christmas Carol” with Tom Morris and Lee Lyford. Other composition work has involved major commissions from the London Sinfonietta, Mahogany Opera, Snape Maltings, and conducting her own film score at the BFI. With artist Mel Brimfield, she’s put a brass band on Stratford station platform (during rush hour), recruited a choir on wheels in Sheffield, and – with over 100 mental health service users – made STAND, an installation exploring mental health currently on tour of the UK. Current projects include an opera with Kenyan storyteller Ogutu Muraya about stories of colonial history, a musical with playwright Finn Beames about pole dancing in the Cotswolds, and an animated exploration of climate change with leading video designer Will Duke… and as many kids as she can Zoom into her living room.